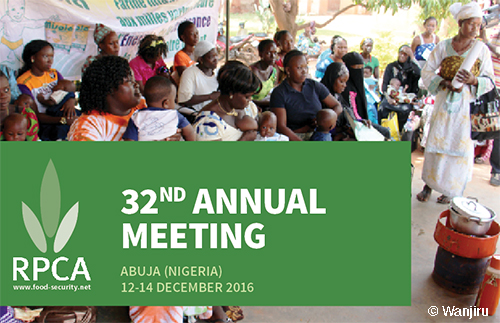 Hosted by the Federal Republic of Nigeria and under the patronage of the Commissions of the Economic Community of West African States (ECOWAS) and the West African Economic and Monetary Union (UEMOA), the 32nd RPCA annual meeting brought together the region’s key food and nutrition security stakeholders. Some 250 participants, including six West African ministers and many high-level representatives, participated in the event. It was the first time that a RPCA meeting took place in Nigeria, providing a timely opportunity for the Network to highlight the implementation of the Cadre harmonisé in Nigeria as one of its key achievements. The meeting reviewed the critical food and nutrition situation in northeastern Nigeria. It also included a thematic focus on nutrition and social protection.

Despite a relatively good agro-pastoral campaign some 15.6 million people could be faced with food insecurity by June 2017, including 5.5 million people in the Lake Chad basin, if no appropriate measures are taken. The situation in northeastern Nigeria is extremely worrisome where some 5.1 million people could face a critical food and nutrition situation by June 2017. The pastoral situation requires close monitoring due, in part, to a decrease in fodder production in the Sahelian belt.

The security crisis in northeastern Nigeria and in the broader Lake Chad basin has severely weakened fragile livelihoods resulting in a humanitarian crisis. The Boko Haram insurgency has led to massive population displacement and extremely high levels of food insecurity in three northeastern states of Nigeria: Adamawa, Borno and Yobe.

According to the Cadre harmonisé, 10.4 million people are in a crisis situation or worse. In northeastern Nigeria, 1.9 million people in an “emergency phase” and 55 000 people in a “famine phase” in the Borno State are in need of immediate assistance. The Nigerian government, ECOWAS, UEMOA, CILSS and development partners i) took stock of the scale of the crisis, ii) engaged in high-level political dialogue, mobilised the support of the international community; and iii) agreed on the next steps through the RPCA Declaration.

The Declaration outlined the immediate steps to be undertaken in addressing the crisis, including providing urgent food and nutrition assistance for the affected populations, securing access for aid organisations in the affected zones, and scaling up technical and financial support to the inter-ministerial task force put in place by the Nigerian government to co-ordinate humanitarian action.

Going beyond immediate humanitarian measures, the Declaration underscored the need for more structural measures, including implementing an economic recovery plan and programmes for rehabilitating and strengthening the resilience of the affected populations. It also called for a more concerted effort from technical and financial partners to co-ordinate and ensure alignment with regional priorities, thereby achieving a longer-term, more sustainable impact on the resilience of the vulnerable populations.

One out of three children under the age of five in the Sahel and West Africa (or some 20 million young children) currently suffers from chronic malnutrition, limiting the development of its full physical and cognitive potential. This weakens the region’s human capital, thereby compromising resilience, causing significant economic losses and impeding development in the region.

The Network Members addressed this theme through three panel discussions that aimed to:

Three years after the adoption of the regional roadmap in April 2013, the Senior Experts’ Group of the Global Alliance for Resilience (SEG-AGIR) reviewed the progress made in formulating “National Resilience Priorities” (NRPs) and strengthening the mobilisation of stakeholders for the implementation of the Alliance.

Eight countries have validated their National Resilience Priorities (NRPs) and three others are in the process of doing so. The SEG-AGIR called for greater visibility of AGIR as an overarching framework for resilience in the region, underlining its key objective to support co-ordination across sectors and stakeholders based on a common approach and results-based framework.

The SEG-AGIR members called for:

RPCA Members called for all stakeholders to respect the Charter for the Food Crisis Prevention and Management (PREGEC). To this end, communication efforts must to be significantly scaled up, and the civil society dialogue platform strengthened.

Some 250 participants, including six West African ministers and many high-level representatives, participated in the event. The opening ceremony benefitted from the participation of H.E. Mr Marcel Alain de Souza, President of the ECOWAS Commission and H.E. Dr Audu Ogbeh, Federal Minister of Agriculture and Rural Development, Nigeria.